I sort of feel an obligation to write more blogs. Why? Because people have been telling me that they check every day to see if I've written new ones. When I check people's blogs, and there's nothing new, it makes me sad. So for those of you that read mine everyday- I'll try and do better. McKie has been at his Grandpa Rand's house since Wednesday evening, so it's been a lot quieter around here. He love to visit there and play with the swords. Real swords- yes! He and my dad get a little sword fight going, and he could do it all day long. I went over to Gardiner Wednesday to get some vinyl done for Christmas presents, and since my sister, Steph, is coming over on Saturday, I asked Dad if he wanted a little companion for a few days, and he did. So it's just been Brensyn, Ansleigh and I for the last day and a half. I've been trying to clean up a bit, but with all the vinyl to peel, I haven't gotten much done. I will try harder today to finish with the laundry and the general clean-up that it seems like always has to be done. It never stays clean around here, wether it be the boys throwing stuff around, or Jaran getting home and just wanting to relax, so he throws his crap around too. So between the three boys- there's a lot of crap to pick up. Ansleigh is such a freakin' cute little girl. She keeps me entertained on a daily basis. And for all of you wondering- NO ER or Dr. visits this week(knock on wood)! So thanks to all of you praying for our safety and health!:) I hope that you're all having a happy holiday thus far! 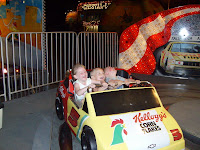 So I just thought that I'd add this photo- cause it's hilarious. It's probably kind of grainy, but you can get the point. Taylin, Kies and Kelden were on this ride, and it would whip them around the corner really fast, and they'd laugh so hard. This was in Billings this summer at the fair! ENJOY!
Posted by jsmbbaker at 10:18 AM 3 comments:

This has been the week from you know where! Yesterday at about 5:30AM McKie fell out of his bed. He has an ear infection, and it's making his eyes crusty and his eyes were crusted shut. I don't know if he was trying to climb down, or just fell out, but whatever happened, it resulted in blood. I ran in there, knowing after the thump I heard, that he was hurt in some way. I picked him up and felt something on my back, and my calf. I turned the light on and saw that his mouth and nose were both bleeding quite a bit. After calling Jaran in, I tried to clean the blood up, and get his eyes opened so he wouldn't be so scared. The blood didn't stop, so I focused on the eyes, and finally got them cleaned enough for him to be able to see. After the bleeding finally stopped, both Jaran and I had to change out of our garments, cause they were covered in blood. They are currently soaking in some oxy-clean, and I hope they will come clean. Poor little guy tore his lip away from his gums on the bottom. It's not severe enough to need stitches, so it'll just have to heal on its own. After one day, it just looks like one HUGE canker sore. He rarely closes his mouth, and his lower lip sticks out a little further than usual. His eyes are getting better now that he's on some anti-biotics, and I am hoping this is the last of the craziness for the week! In the last 7 days, we've been to the regular doc three times... once for Brensyn to get anti-biotics and to check Ansleigh, once for Kies to get anti-biotics and once for Kies' mouth... and two ER visits, Ansleigh wasn't breathing well, and also to have Brensyn's head stitched up. So please pray for us and our kids... it's getting expensive;) and it's quite sad. Until the next catastrophe- I'm out!

If you have a weak stomache, don't read this!

This weekend was interesting. Saturday, as I was doing laundry, and getting some corndogs cooked for the boys for lunch, I heard a wail coming from the living room. The boys had been playing with the wood by the fireplace all day, stacking it and "making houses." As I turn the corner from the laundry, I see Brensyn, standing in the bin that usually holds the wood, head up trying to cry, but can't cause he's out of breath. As I look at him, I see a dark mark on his forhead, and knew right away it was a gash that was about to start gushing blood. I ran over to get him, and when I got there, the blood started running down. I grabbed a tissue and held it on there, as I ran, with him in my arms, to get some gauze from my bathroom cupboards. He's wailing the whole time, not wanting me to push on it, but I'm trying to stop the bleeding. So now, I'm holding him while on my bed, pushing on his "owie" and trying to figure out what to do next. I knew it needed stitches because as I pulled the tissue away to apply the gauze, I noticed some of the "fat" was coming out. So I called my neighbor, Lori, and explained that I needed to take Brensyn to get stitches, and could she come over and help me really fast. She made it over in record time, and I hear the door come open, and running steps to get to my room. She held the gauze in place while I put Ansleigh in her carseat, and got shoes and socks for the boys. I had to try and find a way to keep the blood from getting all over the car, so I found a big bandaid, that goes all the way around the wound, and held the blood in quite nicely. I gave him a sucker, which stopped the wailing instantly, and got on the road. Lori kept Kies for me, so it was just Brensyn, Ansleigh and I on the road to Bozeman. Yes, all the way to Bozeman with a bleeding baby! Jaran met us at the ER and took Ansleigh for a while so we could check in. So they gave him some medication that was supposed to put him to sleep- and it didn't... but it did calm him down enough so he'd sit still. Then they put some numbing liquid on a cottong ball and taped it to his head. After about an hour and a half- two hours of waiting, he got stitched up, and we left. That's when the fun really started. Whatever drug they had given him to help him fall asleep, which he never did, made him go crazy. We had to go to Walmart to get some Neosporin for his head, and he kept flipping out crying and trying to bail out of the cart... so I had to put Ansleigh in the shopping cart part and put him in the seat and strap him in. He cried most of the way home and finally went to sleep when we got off the interstate. Then we stopped to get Kies and went home. He woke up and cried himself back to sleep. Let me clarify- not so much crying and yelling/screaming/crying. It was great fun. I don't recommend it to many people. But we're all good now! Here is a before and after shot! 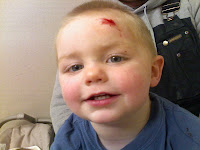 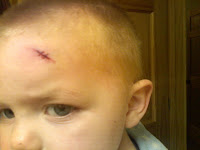