Make an on-line slide show at www.OneTrueMedia.com
Posted by jsmbbaker at 9:55 PM No comments: 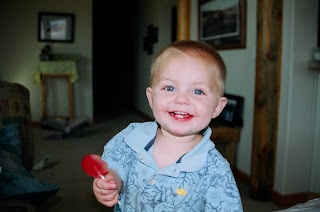 Well, today poor little Brensyn had to get some vaccinations. It was his 18 month well-child check and the whole family was in attendance. They said they were going to give him four shots... two in one leg, one in the other and one in his arm. So they put this special "numbing" cream on there with a little band-aid to "numb" the area. Meanwhile, the Dr. comes in and does the history, checks him over and visits with us. When the Dr. leaves, the nurses come in to give the shots. "Would you like him on the table, or would you like to hold him while we do this?" I answer- "He would probably like it better if I held him." So I set him on my lap and they tell me to hold his arms so he can't get at the needles. I do this and they start. Well, being the smart people they are, they start doing it and don't think they need to hold his legs down. So he jerks away and the first shot had to be stabbed into him three times. The second only twice, and finally the second nurse decides to hold his legs. Then it's time for the shot in the arm... while he's wailing in my ear and flailing around... and they get it done with one poke because I'm hold his arms down. Then they re-stick the band-aids that were on there with the "numbing" cream... and they don't stick so his little shot marks are bleeing. I tell them he needs new ones, and one by one they replace them. He doesn't want them to touch him, so they smear the blood all over. I decided to just take a few band-aids myself and put them on. So the poor kid is traumatized for a while. He's been limping around all afternoon and evening and I feel horrible for the poor kid... and a little guilty after the pitiful looks he kept giving me while he was being tortured. What was the point of putting the stupid cream on? It obviously didn't help... all it did was get smeared around and cause the band-aids to not stick. I just wish that the stupid nurses would get it together and realize that little kids are a lot smarter than they think, and if their leg is hurting, they're going to kick and scream and move it. Hold it down people! So that's my story for today. Next time Kies is naughty I think I'll tell him to cool it or we're taking him to get poked;)! J/k everyone!
Posted by jsmbbaker at 8:36 PM No comments: 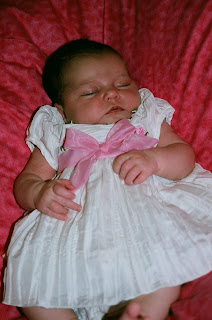 Okay everyone- we are blessing the baby on the 30th. Everyone is invited... and I hope everyone can come. It will be here in Three Forks at 10:00a.m. I am sure that afterwards we will be having lunch of some sort... although we probably won't have that planned until that day;) You know how we work. But that is the plan. Other than that- here's an update. McKie is now going to pre-school in Belgrade Tuesdays and Thursdays for 2 1/2 hours. It's a nice time for me to be able to run errands with just Brensyn and Ansleigh. Trying to do it with all three tends to drive me over the edge... that is unless Jaran's there, then I do okay. Kies also likes to drive me crazy by doing things he's not supposed to do... like getting into the knife drawer and getting knives out or going into the garage and getting into the car and smearing lotion all over. This all happens while I'm doing things with Ansleigh, such as feeding or changing her. Brensyn likes to give himself black eyes. He was jumping from a couch we have in our room to the bed and didn't quite make it, causing him to fall and hit the bed frame with his eye. This is the third close call we've had with his eye... he enjoys scaring the poop out of us! Ansleigh's growing and it's crazy. She is 11 lbs and in the 97% in weight, over 100% in her head size(how is that possible?), and about 70% in height. Short and fat- just the way we like em':) She sleeps almost through the night... usually only waking up once to eat. It's nice... but there's the occasional up every two hours that totally drains me of life for the next two or three days. Jaran's just working and bringing home the bacon... and I am trying to do it all! Just keep your fingers crossed that I don't go insane, cause it's headed in that direction!
Posted by jsmbbaker at 3:19 PM No comments: