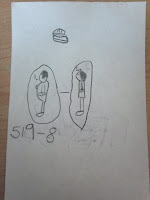 So Brensyn woke up at 4:30 Friday morning, and started watching infomercials. He came in and told me we should buy a pilates chair, and that it makes you skinny. He went back to watching for a while, and went to show Jaran the picture that he drew. It started out with a lady before pilates and one after. Then he started writing down the number, but it went too fast. Hilarious. But I would like to figure out how to keep him asleep... he woke up at five this morning. Ugh!
Posted by jsmbbaker at 12:24 PM 2 comments:

Wow... I am a horrible blogger. I was really good at it once upon a time. Maybe now that I will have something to be writing about constantly, I will start it up again! As most of your know, well those of you who have facebook, so not Shayla;), Jaran and I are expecting baby number four! I'll be 15 weeks along on Saturday, and I'm so excited to be out of the first trimester! I don't know how women have more than one baby if they get morning sickness. I was lucky to be pretty healthy with the first three. I had a smidge of sickness with Ansleigh, but boy, this baby has taken a toll on mommy dearest. And why do they call it morning sickness? Because that's the ONLY time I WASN'T sick! 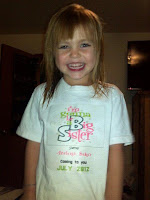 It was super exciting for the kids to find out. I remember when we told them they were all excited... about five minutes later McKie says, "So that means that you're pregnant, right?" Ha ha ha. I guess I just assumed they knew, but great of him to figure it out on his own. All three of them want a girl, so I hope they get their wish, or I'm afraid that they'll be devastated! I don't really care what we have, as long as it's healthy. Jaran says that if we have a boy, we'll have to have another one so we can have a sister for Ansleigh. UGH! I don't know if I can do this again! 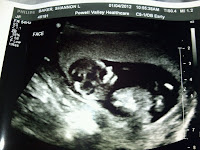 Trying to do full-time school, mommy to three kids, wife to one, and all the other stuff that life throws you has been super hard. Harder than I remember... probably cause I usually felt fine before. I'm not sure why this one has been harder. Perhaps because I am much older than I was the first three times. I had McKie at 21, Brensyn at 22 and Ansleigh at 24... I will have this baby at 29... that's the only difference I can figure... or perhaps the stress;)

But I am super excited. I'm finally starting to feel half-way decent, and I'm starting to get a tiny bit of energy back. Jaran has been great, but I think taking care of the kids at night is starting to wear on him. I have been actually able to fix dinner lately, and I think that makes us both feel better.

Well, that's all for now. If anyone even reads my blog anymore, thanks for stopping by! Take Care!
Posted by jsmbbaker at 2:50 PM 6 comments: