I've been lucky enough to make it to four Baker missionary homecomings since Jaran and I have been together. In fact, the first time I met his WHOLE family was when Jeremy came home from his mission. Every time has been great, but there was just something about Zak's. Maybe cause Zak was so young when Jaran and I got together, we have become really close. I wrote him a lot on his mission, and the hormones and emotions that come along with pregnancy may have had something to do with it as well. On Wednesday, we left for Utah... at about 6... p.m. So we rolled into town around 2:30 in the morning. Finally at 3:00 in the a.m. we were able to get the kids settled down and sleeping so we could sleep as well. McKie was awake the whole way there. Didn't fall asleep at all. Brensyn slept the longest. Ansleigh woke up about an hour or so before we got there, and I tried to doze on and off after I was done driving. We took our little green car cause the van was acting up... which is another part of this story to come later.
Thursday was the big day! We woke up and I was able to spend some time with Camary, Rayce, Brensyn and the Jeremy and Camary's new little baby girl. It was so nice to sit and hold her and realize I'll get to do that soon for as long as I want! So after we were all up and ready to go, we went and got Jaran some In and Out burger and then took the kids to Hardee's while I got my nails done... which I haven't done since conference weekend and they were looking horrible! Then Nikki let us know Zak was going to be early so we headed straight to the airport. It seemed like we had to wait forever! But then there he was, running towards the escalator and we all had to wait and watch him come down. I'll tell you what, Zak gives great hugs! We all got to say hi and talk to him and really had a good time. Then a bunch of us went to visit Jaran's Grandma Brown in Tooele. It was nice to see her, even though she's to the point where she didn't know who we were. I think she felt the love from us, though. We then just went and spent time at the Baker parents house until Zak reported on his mission to the stake president... which Jaran was cool enough to let me go to and he watched the kids. I've never been to one before, and it was super spiritual and great to hear all of the stories Zak had to talk about. After that, we went over to Kendra's to visit for a bit, and it was fun to see Zak react to the changes that all of the kids went through while he was gone. In fact, 7 babies, all girls, were born since he left on his mission! 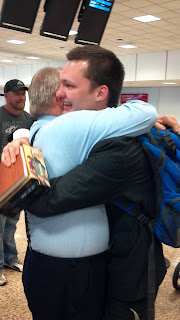 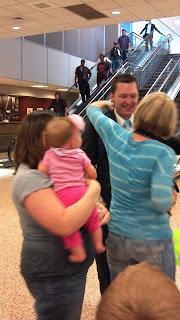 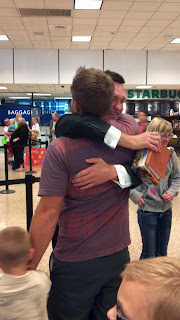 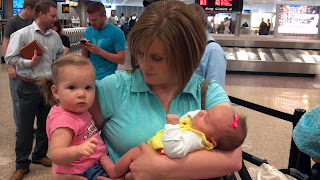 Friday was the day that Amand and Luke were getting sealed with their precious little Tevia. We woke up, dropped the kids off and headed to the Bountiful Temple. It'd been a while since we went to the temple, so it was great to go through a session with them before the sealing. It was beautiful, and super spiritual. Knowing that you are able to witness a family sealed together forever is a pretty great experience, and we were so thankful that we were able to be a part of it. We then gathered at Jeremy and Camary's house for the blessing of Tevia and of Jeremy and Camary's baby, Zync. It was nice, and we got to visit with a lot of people. We went to get the kids and hung out at Kendra's for a while longer, then all the kids had a sleep over at Gma and Gpa's while a bunch of us went to the Avengers, which was a really good movie! Zak's first movie in two years, and it was amazing!:)

Saturday we all just kind of did whatever. I watched Rayce for Jeremy and Camary while they went to the funeral of a dear friend that passed away. And we had a fun time. While Rayce napped, Ansleigh and I played with the ball pit and threw balls outside. Jaran had tried to take the kids hiking, but they stayed up late the night before so they were grumpy and didn't want to go once they got to the spot. So they just went back and played. So we met up and headed out to Antelope Island with Kendra and her family. That's an experience we can say that we had, and won't be repeating. The water was stinky, the kids were crying cause the salt water hurt their owies, and they were all filthy with sand and salt, and tired, and so we didn't stay long. In fact, on the way out, Ans and Brens fell asleep! So we went home and got some food and went to bathe the kids at Gma's house. After we ate, and visited for a while, we went back to Jeremy and Camary's (where we were lucky enough to stay with them and have a fun time) and got some sleep! 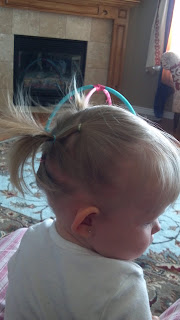 Sunday we woke up early to make it to church on time for Zak's homecoming talk. It was great! There was a missionary leaving on his mission who's little brother spoke first, then he did, and then Zak. The meeting went about fifteen minutes over HA HA HA! And of course since it was Mother's day, we got to celebrate all the great women in our lives! We then went to the house and had a great lunch and hung out with everyone, all the family and Zak's friends, and we only got away with minor injuries: See Ansleigh's eye, courtesty of Brensyn's head and a tramp! Jaran and the boys headed home in the green car around one, and Ansleigh and I got to stay an extra night. Kaysen had a birthday, so we sang to him and had some cake! Kendra made  a great dinner for Mother's day, and we got to have more fun and visit. 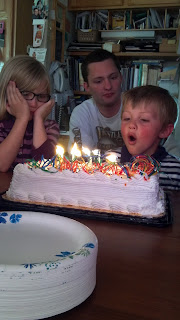 Monday, Ans and I went and got our toes done with Kendra and then hit the road! It was a long trip- about 10.5 hours back, but we had to stop and get out a bunch. It was a really great trip, and so good to see everyone! I feel like everytime I saw Zak, he would pull me in for a hug, and I loved it! I hope he comes to visit more often, cause he makes me feel loved!:) Not that my kids and hubby don't, but I'm used to hugs from them ha ha ha! 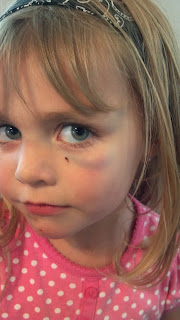 About the car/van... We got a new van! Our old one is starting to make a weird noise, and I'm sure we can fix it, but we've had it for a while and were ready for an upgrade. Jeremy gave us a great deal on our new van, and we love it! It's a Mazda MPV. It has power sliding doors, windows that roll down on said doors, a sun roof, stow and go seating in the back. Just awesome! The kids love it and I love it... which I never thought I'd say about a van. But I'll be for sure to get some good pics eventually to show it off! Thanks for reading my novel... sorry- just a lot happened that weekend! Take Care!
Posted by jsmbbaker at 5:19 PM No comments: