Wow! It's been two weeks since we went home last... and it's much needed. As much as I love my family here, trying to squeeze into this tiny little trailer is driving us all a little crazy. Joseph and Kendra are baptizing their two boys, Trevin and Tristan, so we are using that as an excuse to take a break from the craziness. Jaran has been remodeling my childhood home in Byron so that my Mom and Bob can sell it. He's already done a ton on it, and he says he's kind of enjoying... I guess as much as you can enjoy working your butt off! It'll be great to see whoever will be coming from Utah for it. The last time we saw anyone was the end of December, so it's been a couple months. Ansleigh and Brensyn also have some check-ups at the doctor for shots and stuff, so I will update you on how big they both are and all of that jazz. I still don't know for sure how long we'll be staying in Wyoming... but as long as Jaran can find some work- we will be wherever it is! Take care everyone- Ansleigh is being a growly bear so I need to go and check on her!
Posted by jsmbbaker at 3:01 PM No comments:

I decided to go ahead and update my blog two days in a row. Not because I think it needs to be done, but because I am afraid to go into the other room and see the mess my kids have made since I have been on the computer for 10 minutes. I keep making the boys come in here so I know they are still living and breathing, and I hear Ansleigh playing in her jumperoo... but that doesn't mean that the carpet, furniture and toys are unscathed. As I was skimming through other people's blogs, I found one by "mormon mom." Whoever it is- not that you are a blog lurker like me- just in case you read this- thanks for saying the things most of us don't take the time to! I really do love being LDS. I don't thank my Heavenly Father near enough for the blessing I feel that I earn because of the things that are taught by the church. There are things that many people find odd about our religion, and maybe some of the things are a bit odd, but I am thankful that I have such a great reason to be part of something odd! I'm pretty sure that most of the people who read my blog are LDS- although a select few may not be, but just so you all know, I am greatful, thankful, and blessed to be part of it! I give thanks to those who came before me that were brave enough to shoulder the persecution that came along with being a member of the church when it first was restored. I have read numerous accounts about all of the things that people went through and I can't honestly tell you that I would have stuck it out through all of it. I wasn't there, so how can I say it? I know for a fact that one of my great-great-great-grandfathers was a bodyguard for the Prophet Joseph Smith. He must have gone through some pretty horrible things while being so close to him. Because of him, however, I am here, as a Latter-day Saint- and proud of it. I'm through rambling... as I have most likely said the same thing in many different ways.
Here are some pictures of the kids at the park last week- it was a blast for all involved! Here is Ansleigh loving the swing. It sort of looks like she has a nubbin for her right leg- and I laughed so hard! 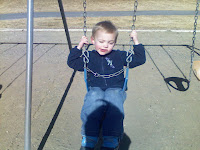 McKie being the little weirdo that he is! I love that kid! 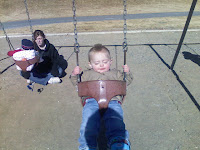 Brensyn could swing all day long if I'd push him! 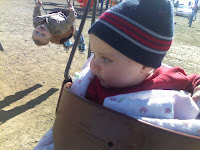 I had to add this one, not so much because of my beautiful little girl, but because of Brensyn in the background- it's hilarious!

PS- Just checked on the boys- and they were sitting quietly on the couch watching Kai Lan! Yay boys for not being naughty!
Posted by jsmbbaker at 8:05 AM 2 comments:

More of the same

Nothing really exciting. More depressing than anything. Jaran decided he needed to play basketball again, seeing how he missed it for a year. So not this weekend, but the weekend before, we were back in Three Forks for the weekend and he decided to participate in the ward game. Right after half-time, I took the kids to play in the nursery to play, and while walking back to the gym, Jaran comes walking out limping. That's right- he hurt his knee again. The left one which he had ACL surgery on last December. So even with his brace on- he thinks he tore his ACL again. I don't know if they will want to repair it again. So he could have to live the rest of his life with a messed up knee, and all because of a stupid church basketball game. That makes me so mad that I don't think that I can write any more. Not much has gone on besides that anyway... Just more of the same- staying at mom's too small house and going crazy! Take care all. 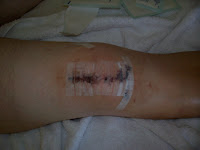 Just a pic of what we had to go through last time this happened! Yeah- that's how he hurt it the first time- CHURCH BALL AHHHHHHHHHHHHH!
Posted by jsmbbaker at 6:40 PM 2 comments:

I know I just did a post! Read the one about the mohawk below first- then this! 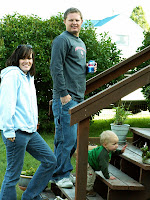 What is his name? Jaran Mica Baker

How long have you been together? Married 5 years on June 14th

How long did you date? About 9 months before we got married!

Who eats more? He's got me on this one!

Who said I love you first? I did. But it was hilarious how quickly he replied with- "I love you too!"

Who is taller? He is.

Who can sing better? Well... if he had ever had choir or any type of singing class, we would be even

Who is smarter? Depends on the subject. We can both hold our own

Who does the laundry? I do mostly, but he doesn't mind doing it too

Who pays the bills? He does- when he chooses to;)

Who sleeps in the right side? When laying there, he's on my right hand side.

Who mows the lawn? We don't have a lawn!

Who cooks dinner? I do!

Who drives? He usually does. But if he gets sick of it, I will

Who is more stubborn? Me for sure.

Who kissed who first? He kissed me

Who asked who out first? He asked me, and I already had a date that night, so after I was done with the date, I went over to his house! HA HA HA!

Who proposed? He did! It was great! You'll have to ask me about it sometime.

Who has more friends? Well... I guess I do... although he has a few close buds he stays in contact with.

Who is more sensitive? I think me.

Who has more siblings? He does for sure.

Who wears the pants? I do. Mostly because he lets me though. If he really doesn't want something- then I eventually will give in... but he spoils me and lets me do just about anything!

People who should fill this out: Everyone who wants to! It was fun!
Posted by jsmbbaker at 10:06 AM 2 comments:

Brensyn has been in need of a hair cut for some time now. This time- we decided to go bold and give him a mohawk. It's freakin' cuter than crap too! We love it. He was a pretty good kid throughout the whole deal too. Usually it takes an army to give the kids a haircut, but with Grandma Barb at the wheel- he didn't dare do anything crazy! 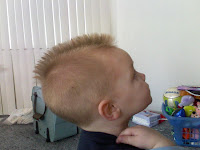 So it was a painless experience, which we will probably have to do quite often at the rate his hair grows. Jaran wanted to grow it out- but if you've seen this kids hair- you know that it would be a mistake to do such a crazy thing. 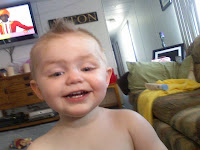 I gave in and said that we could grow out McKie's hair- because it lays down and is manageable... which Brensyn's is not. So no all I have to do is put a little wax in it- which is easy since I use it on my own hair- and we are good to go all day long! Have a great day everyone!
Posted by jsmbbaker at 9:42 AM 1 comment:

Brensyn turned two on Saturday! It's crazy, but yes, he's two. We had a little party for him with the family at my mom's. We have been in Wyoming for a while, so that's why we did it here. He got a bunch of flashlights- which were a hit with all of the kids present- some more tools to go along with the ones the boys got for Christmas, a pirate hate and patch, a shopping cart- which he loves- and just some miscellaneous stuff. He ate most of the frosting off of his cupcake, but didn't get into the actual cake part much. 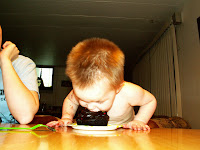 I love cupcakes!
We had fun. 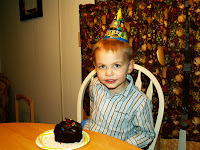 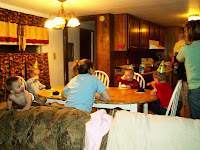 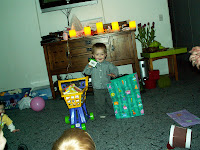 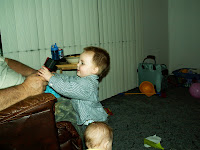 So as I said, we have been in Wyoming for a while. Jaran's next job keeps getting postponed, so thankfully Bob has been giving him some stuff to do. He has been doing new siding on the house in Byron, and will continue to renovate it until we have to go back to Montana. We are staying at my mom's, which pretty much sucks, seeing how there is ABSOLUTELY NO ROOM! We are staying on a full sized mattress, with Kies on the floor and Brensyn in the miniscule computer room in the port-a-crib. Ansleigh sleeps with us too, since there is no other place. She sometimes sleeps in her carseat with a fluffy blanket under her for some padding. That's not the worst part about the sleeping. Brensyn wakes up every night around two or three and won't stop screaming until Jaran gets him some new drink and also gets him out of bed. There's obviously no room in the bed with us, so Jaran goes out and sleeps with him on the couch. See, if we were at home, we could just let him be and let him get his screaming out of the way while we try and ignore him and sleep. But in this tiny trailer, with the cardboard thing walls and doors, the whole house would have to endure a sleepless night. That is not something we are willing to do, so we just have to appease him for now. It sucks, but we don't have any other choice. So for now- that is where we are and what we are doing. I need to go before my mom freaks out on me! Talk to you all later! 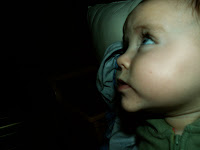