I would like to apologize to the people who read my post where I was ranting. I'm irritated at myself for getting so crazy! Jaran and I have been a lot less stressed out lately. And the reason for that is that our mortgage company, after having a talk with them, lowered our interest rate from almost 9% to 3.95%! That cuts our payment by more than half! Now we have a small enough payment that we could rent it out and even make a little, depending on how much we want to rent it for. Thanks to all of you who have been thinking about us and praying for us. It has been such a big load off of us, and a great answer to our prayers! The kids have been better behaved the past week or so, and I think a lot of it has to do with us being in such a better mood. I love my kids, and they have are such a great joy, when I let them be. I just need to remind myself how blessed we really are, and that there are a lot of people struggling a lot more than we are!
Moving on, this afternoon, I got a call from my cousin, Steven Bassett. It went something like this:
-David Cook's Light On ring tone playing and me not recognizing the number saying "hello?" in a tone like- who is this?
-"He Shan, this is Steven. Are you terribly busy today?" First of all, what kid his age says terribly busy? I get a grin on my face, thinking, what does he need;)?
-"No I'm not terribly busy, we're just hanging out at home. What's up?"
-"Well I went and got my hair cut yesterday and then had to go straight to work. I was wondering if you could maybe fix it?"
-"So you must have called my Mom and figured out she wasn't home?" You see my mom has been cutting his hair, and Erik's a lot, since I can remember.
-"Yeah I called like 5 times and she isn't home."
-"No she's at regionals. I can do it, come on over."
-"When, now?"
-"Sure whenever."
-"Okay see ya."
It couldn't have been 5 minutes later. I had enough time to pick up the bathroom a little from the mess the kids made with water and toilet paper, thankfully JUST water, and put a bra on;). This poor kid wasn't kidding that he needed his hair fixed. He has an INCREDIBLE amount of hair, and had said the girl cutting it had tried thinning it. Well, she had done a horrible job, and I knew it was going to take some doing to fix it. So after poor Steven sat there for a while, telling me how this crazy person messed up his hair... I even think he mentioned how she was wearing 7 shirts all at different lengths, ha ha ha ha ha ha ha, we got it done! I was pretty proud of myself. I mean- he has got about 5 times the amount of hair Jaran does, and Jaran's got a great head of hair. He must roast under there!
After we were done there, Serena Hessenthaler called and invited us over for dinner. Ranee and Adam Clark were there, and Dave and Jen Hessenthaler. It was fun to just sit around and talk for a while. We all say that we need to do it more, but we don't do it often enough! I swear we need to make some type of schedule so that it actually happens! I have some pictures I will post later of the kids, but I'm too lazy to open my mail, download them and then upload them, so wait for the next post! I'll try and be better at posting... I get irritated when people wait too long between posts, and I'm one of those who does it! Take Care!
Posted by jsmbbaker at 8:05 PM 2 comments:

Thursday was our last high school dance performance! It was the Rocky/Lovell game so there were a bunch of people there, and the girls did great! I don't remember if I mentioned before, but my little sister, Calli, came the weekend of Brensyn's birthday party and took pictures of the girls, and here is our group shot:

Didn't it turn out great? She took individual shots too, but with 17 girls, this post would be too long... so I'll just post the group photo. We are having our last performance tomorrow at the College in Powell at 5:30 if anyone wants to come and watch us. With so many girls, I didn't think we would be able to fund-raise and get enough volunteers to make it to regionals, so I called up the college and finally got a reply about dancing up there. We will have a little party on Wednesday for our last hurrah, if I may steal the phrase.
We visited Three Forks this weekend, and it was sad and happy. It was sad because we didn't want to leave, but happy because the kids had so much fun it was hard not to just stay on our air mattresses with one change of clothes forever! We also went to church and saw all of our old friends. They were excited to see us, and it was so much fun seeing them. We may have found a renter for the house from one of the Brothers from the ward, so I will update on that later. We spend some time with Kade and Rose and the kids got to play with Maddox. I find myself wishing I were back there. It's weird because when we were there before I couldn't wait to try a new place. But I guess that Byron isn't really a new place so it doesn't count!
I played basketball with a bunch of ladies on Thursday after the big game... ladies... feels like I can't call us girls, but ladies? anyway... and I had so much fun. Even after the next few days of being sore, I think I'll go back and do it again. I felt so good the next day... sore, but almost refreshed! It's nice to know I'm not the only mom that is slightly (in my case HORRIBLY) out of shape! Well I had better go now- Take Care!
Posted by jsmbbaker at 1:23 PM 4 comments:

Oh my flipping flip flapper! I just typed the longest post, and it somehow erased itself. I went to the draft, and it saved just before I left, so it was just blank. Which adds to my blah day and week. GRRR!!!!!! I guess I will start over again. We headed to Billings on Friday cause Jaran is currently out of work and Kies didn't have school. Jaran and I decided to donate plasma so that we could make some money for a nice dinner and to save a few lives. So we got there, started doing our physicals, only to find I wasn't quite hydrated to what they like when they draw plasma. So I could do my physical, but not donate. They ask questions and poke and annoy you... and you have to have blood drawn for them to test. The lady that did mine was HORRIBLE! I have a 2 inch bruise from the puncture site up my arm. 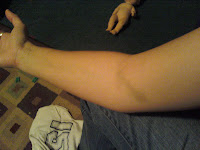 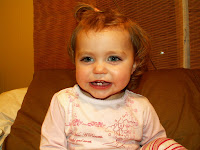 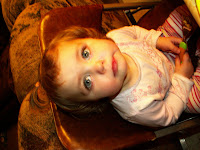 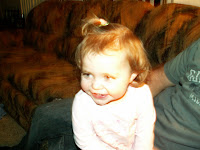 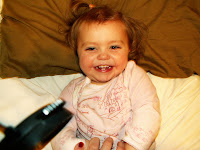 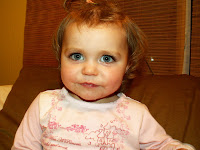 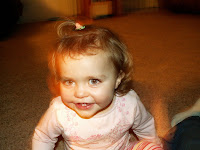 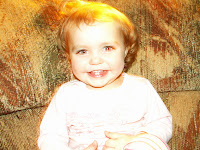 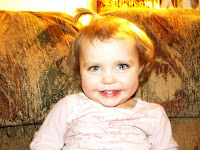 Brensyn will be THREE on Monday, but we decided to celebrate the weekend before, since next weekend will be Valentines day. So we had a party at the lunchroom at the high school, as our house it rediculously small for a get-together. Brensyn really likes tractors, so Aunt Steph made him a most excellent tractor cake! It turned out very cute! Uncle Kade was kind enough to do a beach front scene for the kids to take pictures in front of. I kind of stole this idea from Kendra. She had a lot more decoration, and the whole party was beach themed. It was so clever, so I stole it! I had a "surf board" for them to ride on- a.k.a. my ironing board- and we would lift it up and have them hang some ten while Calli took pictures. My family is very talented... hmm... Cam had her in-laws in town or I'm sure she would have done something magical and fun too! Brensyn loved all of the stuff he got, and the kids had a BLAST! I just need to explain that the beach scene Kade did with spray paint a couple hours before the party- isn't it amazing?! Holy monkeys! I did, however, fashion the life-like trunk of the palm tree;) Here are some pictures for your viewing pleasure!

Make an on-line slideshow at www.OneTrueMedia.com
Posted by jsmbbaker at 10:34 AM 6 comments: