We had a great Christmas! We went to a party at Kim and Kurt Acton's house on Christmas eve, and we had a great time! We ate lots of yummy meats(Kurt and Bob were in charge of the food;) and I made cookies for everyone to eat. We had a white Elephant gift exchange... but it was just more of a $10 or less gift exchange. The kids all got something from Mom and Bob, and we just sat around and talked and had fun.
When we got home, we opened our PJ presents and made some sugar cookies for Santa. The kids all decorated one, and then I decorated one and we all took a bite of it. 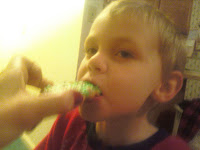 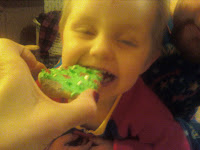 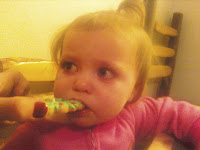 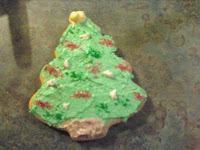 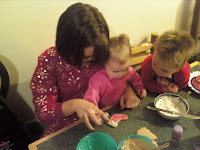 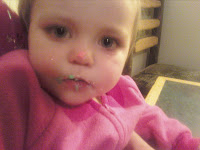 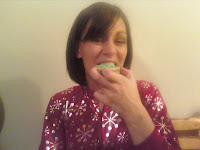 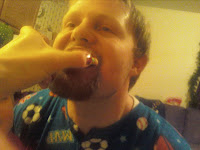 All of us taking bites and doing cookies
So, for months, all that McKie has wanted is a lizard. So we told him if he was good, maybe Santa would bring him one for Christmas. We went up to Billings to finish our shopping and went to petsmart to get the lizard stuff. Well, we waited there for around 30 minutes to get someone to help us, and finally, when she came, she said there wasn't a set-up there for a tropical environment, only one for a desert environment. I didn't think that a simple little lizard needed much, and I didn't think the small lizards that were out in the sandhills needed a tropical set-up. BUT... they do. So we contemplated wether to just get a bigger lizard and use the desert set-up, but it would have been $40 more dollars, and I didn't think that we could handle that, it was already costing more than we wanted to pay. So we called the place that they told us to at petsmart, and they were closing in 15 minutes, and the roads were horrible, so we didn't know if we could get there in time, but thankfully, the people there stayed open long enough so that we could get our things! It was so nice of them! He was so excited when he walked out on Christmas morning to his lizard! I got a video on Calli's phone, but it was too long to send, and my phone was at my sister's so I don't really have any Christmas pics. That, and McKie threw up after he opened half of his presents, so we were cleaning that up.
After we opened presents, we went over to Cam's and ate a very good breakfast that mom and Bob made. Dad brought over the kids' gifts and all of our gifts(the traditional 12-pack of pop and some moolah- love it!) and we gave him his. We then went home to take naps... and I actually got to take one! Then we woke up, went to Mom and Bob's and the kids opened their presents there.
The day after Christmas, we always go up to Billings and Mom and Bob give all of their kids our gift(moolah again) and we get to partake of all of the sales and get what we want or need! We shopped around for a little bit and met up at the Golden Corral for a late lunch. After that, we went to a couple places to look at snow suits for the kids and we got an ipod alarm clock dock for Jaran. McKie went home with Maddox for a few days(and I already miss him tons).
We then went home and got ready and went to our UGLY SWEATER PARTY! It was great, and there were a lot of great sweaters. I don't like to do things half-way, so Jaran and I did whole outfits for ours! 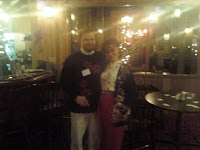 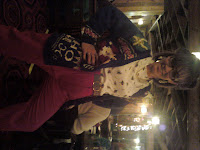 The kid that won had this off-white sweater with blue polar bears on it, and it was fantastic! We left early, cause I wasn't feeling well, but it was a good time, and we got to see Alex, whom I haven't seen since high school!
Well all, it's time to do something non-computer-related!
Take Care!
Posted by jsmbbaker at 4:02 PM

Sounds like you guys had a really good time! I love the Christmas sweater party, that's a great idea.

I DID NOT forget to mention you doing my hair! It's two posts down from the one you commented on, titled "The 20th, 21st, 22nd and 23rd" I didn't write about me dropping stuff off on Christmas Day because I wasn't there very long! You were practically pushing me out the door before I had finished saying good-bye! :) I'm hoping that's just cause you were still asleep! :)

I'm glad you got the lizard stuff! I love nice people who make our lives much easier!