Baby it's cold outside 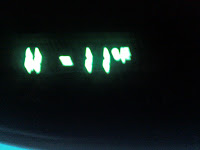 I know that it's not as cold toay as a couple days ago, but it's still so dang cold! I am pretty sure it's reached 20 below here one night. I would describe it as skin-peeling cold. Why? You might ask. Well, it's because it feels as though your skin is being peeled away from your flesh when you walk outside. And if it's blowing at all- it's HORRIBLE! I like snow, and I don't mind the cold most of the time... but it's TOO cold to be fun.
Last night we went to the Lovell/Rocky game, and it was very disappointing. Our boys didn't play very well, and I felt so bad for them. Every shot they put up just didn't want to go through the basket! We took the kids, and Jaran left not long after the 3rd quarter started with Ans and Brens. Kies and I stayed, and he had fun hanging on the railings of the bleachers. He kept asking me to take pictures, so here's what I captured! 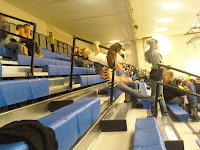 We finally got our dance uniforms, and I gave them to the girls Wednesday at practice! I think they're pretty dang cute, what do you all think? I'm really proud of the girls and how hard they have been working. We finally finished the dance and are ready to perform. It's so exciting! 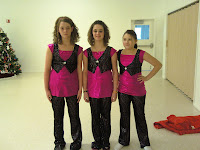 We are going to finally decorate our tree today after Jaran gets here. It hasn't really felt like Christmas since we haven't had any decorations, so I'm hoping this will make it more real. It's less than a week till and I can't wait now that the kids are old enough to get excited. I hope that they're not disappointed, as this year is going to be mostly homemade stuff. I'm sure it will be fine, as long as we find some big boxes for them to play with, right?! 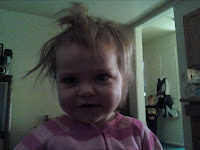 This is just a pic of Ansleigh after she woke up yesterday. She had a pony-tail in her hair the day before, and it held it's shape pretty well. Steph said it looked like the baby Grinch from the real-life movie! Ha ha ha! 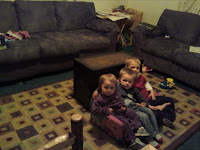 A very cute, and unusual, picture! They were sitting watching "Kung Fu Panda" and were all sitting so nicely! Sweet babies!
My Aunt Deana flew in for a few days to help get my Dad's place ready to move into. We had our ward Christmas party Wednesday night, which I had to sing at, and then I took her to Cody so she could go to the airport early the next morning. I ended up staying until after 2 and just talked with her. It was nice to catch up, and get my gossip quota filled;)! I am hoping that I will be able to make it to Denver for my cousin's wedding on Jan. 10th. It's been 4 1/2 years since I was there last, and I used to go several times a year before that. Cross your fingers for me!
Well, sorry the post is kind of boring, but it's been a semi-normal week! Take Care!
Posted by jsmbbaker at 10:28 AM

the picture of all your kids sittin there together, I have that exact same rug in my house!! weird! We must have good taste!

You will have to fill me in on the family gossip!! I hope you guys are able to go to the wedding, that would be so much fun, and we would have someone else to feel our pain on things! haha!

Love all the pictures--very cute, especially the one of all the kids sitting together (so sweet)!