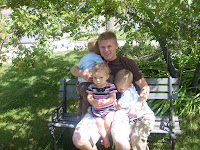 Buddy getting his last hugs from the boys 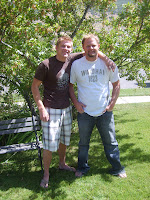 I know I wrote about Buddy a tiny bit last post, but after hearing and reading so much about him from other family members, I wanted to go into more detail for those of you who don't know him, which is about half or more of the people who read my blog. Actually, I don't know who reads my blog. If you do- would you leave a comment, even if it just says, I read! Anyway...

Joshua Ryan Baker was born on September 7th, 1988 to Loyal and RuthAnn Baker. He is the 12th of 14 children and is the 6th son. As I've been told, when he was very young, either a few weeks or a few months, he came very close to leaving this life, had it not been for the prompting that his parents had to take him to the hospital. Something was wrong with his digestive system(I think that's what it was) and they were told by the Dr. that he wouldn't have made it through the night at home. So we are all grateful to Mom and Dad Baker for being so in tune with the Spirit to know what to do! I came into the Baker family when buddy was 13. And one of my first experiences was watching a video he had made when he got bored and couldn't sleep a few nights in a row. Let me re-phrase, he slept all day long and stayed up all night- which we all know he's great at doing;)! In this home-movie, he would set up camp under a blanket, turn on the video camera, and take a flip-flop and hit a completely sleeping person on the head. IT WAS HILARIOUS! He later graduated to putting shaving cream on the shoe, causing his victims to become so ANGRY they wanted to maim him. I couldn't stop laughing, and this had me realizing that I was going to love this kid. Buddy is a wrestler, a 4.0 student and a great all-around person. He is such a great wrestler that everyone who knows anything about wrestling in Utah knows his name. He got a scholarship to wrestle and Boise State, and will have a place there when he returns from his mission in the Nicaragua, Minagua(spelling?) mission. This last Sunday, as he was speaking from the pulpit, I realized how prepared he is for this mission. He gave the best talk from a pre-missionary that I have ever had the opportunity to listen to. His subject was having a peaceful heart, loving heart, something heart, and the likenesses that he made were great! He told the story of how after he and his roommate got their first utility bill, seeing it was so high and not really knowing what else went with the utility bill, they decided to turn off the heater. It wasn't so bad at first, but being one of the worst winters in Boise in a long time, it didn't take long before they were making excuses to be out of their house. They would wrap themselves in layers and go to practice early, or go to friends' houses. Before long, they realized that this wouldn't work, and had to turn the heater back on. He said that the Spirit is like the heater. You can slowly lose it, but you will start to realize that you can't live without it anymore. Of course we all laughed at the story, but it was a great likening. Also he talked about how he was trying to cut weight from about 140 lbs to 125 lbs. He would go to practice, lose a ton of water weight, put himself into a sweat suit and jumprope and run, go home and eat a TINY bit, let the suit dry out in the dryer, put it back on and go back to the gym, then if he could stand it go into the sauna. This whole time his roommate was there helping him, going anywhere Bud asked him to go, and was his constant companion in times of struggle and need. He likened this to the Spirit. As long as you need it, it will be your constant companion if you do what is right. I love Buddy, and we will all miss him while he is away. He is such a great example to everyone around him, and all of the people that came to his farewell was only a small group of the people that he has touched in his life. I am so grateful to have him be a part of my life and am such a lucky girl to have him as my family, as well as the rest of Jaran's family. Even though there is a LOT of crazy people, Kendra, Nikki, you know who you are;), I love them all, and I wouldn't trade one of them for anyone else... okay that's not true, Kendra and Nikki, I'm sorry, but I might trade you for the awesome werewolf and scary half man half woman that we saw at the Twilight book party, I'm sorry- but I have to put it out there! J/k, you know I love you! But truly, Buddy, I know you won't be reading this, but I am a better person for having you in my life, and I thank you for that! You are going to be a great missionary, and you will touch so many lives in such a great way, that Nicaragua will never be the same. Good luck to you Bud! We love you, and will await the day when we will be able to hear all of your awesome stories when you get back. Two years to go! Until then, Take Care!

I read your blog Shannon!I forget to comment sometimes because i see someone elses blog i want to read, and then i get distrated!

lol..Hey Sandy V! Haha. I love you Shan! You're amazing!

I just wanted people to comment so that I can see who reads it, not cause I NEED a comment, although it does help me to want to write more often when I know people read it.

That is such a cute post about buddy! I love it! I always read your blog Shan, i love it!

Oh and I need to add because I think it is amazing, but buddy actually got a acedemic scholarship for his grades, not a wrestling scholarship, I was totally amazed when I found that out! He is such an awesome example to all of us! He is such a great student and athlete! I miss him :>