There is so much I need to post about! Jaran had his 30th birthday on the 20th, and leading up to said day, he was having a hard time coming to grips with it. While watching "Failure to Launch," I said that paintballing looked like so much fun and asked him if he'd ever done it. He said a couple times in Utah. So I started formulating a plan. I asked Erik and Jordan if they knew of any places. Erik said that there was one in Greybull so I called. The didn't answer so I left a message. They never did call back, so I started finding places in Billings and came accross the perfect place. For $25 you get 500 paintballs, a gun, a mask and all day field access and air. So I set up a time for us to make sure there were guns. Being the smart person I am, I realized just having two of us there would not be very much fun, and decided to take my poor sister and her poor boyfriend with us and pay for it for her birthday which was today. I say poor because Matt is going to school and working part time and Calli is working somewhat part-time and having to rent a place. She has a great job that she loves, but the people always give her too little hours to work. Anyway- we had a BLAST! We got there around 10:30 and started having fun. I only have one picture of the thing, and it's a nice welt that my loving husband gave me after I was already out and standing up... here it is: 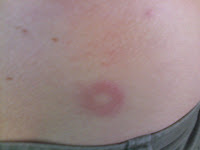 The lady told us it's like stubbing your toe- you hurt at first but it goes away quickly. That is a lie. Either that or he must have gotten me just right, and I must have gotten Cal just right- in the rear end... I still feel bad about that one. I ambushed her cause she would NOT move from the place she first hid. After being hotter than snot in our pants and long sleeves, we had to go cause Matt had to work and Jaran HAD to watch the BYU/WYO game from start to finish. We had a ton of fun and I'm glad that I am such a genious;)!

Okay- can I just tell you all how much I love my little girl. Not that I don't love my boys- but you just CAN'T dress them up into a cheerleading outfit like you can Ansleigh. Case in point: 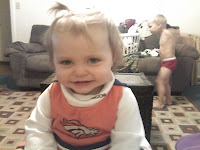 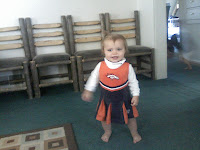 It is because of her that they won that day. I love it! I have a video of her and it looks like she's dancing in it. I sent it to a few of you, and it's so flippin' cute! She is such a little trooper when it comes to stuff like that. I have taken to flipping out her hair with my straightner and I know she is such a good girl when she doesn't move and lets me. I love it!

Poor McKie had a horrible little accident this Friday. He didn't have shoes on, so I took him out of the car and sat him on the sidewalk. I was going to get Ans out and just happened to turn to look at him as he tried crossing a corner of the garden to get on the sidewalk and stepped on this: 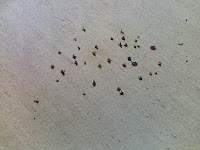 That is 32 goathead thorns. Not only did he step on them without shoes, but after stepping onto them, he then stepped onto the sidewalk again. If you'll look closely at the picture there are a few drops of blood in the midst of the thorns. I carried him inside after removing the thorns and sat his feet in some water to try and calm him down. Then I got the tweezers to try and remove the pieces that broke off into his foot. It was WORLD WAR III. Both Bob and Jaran were trying to hold him down so I could do the task at hand and he still managed to flail. I wish I could have gotten a picture because at one point Jaran was plugging his ears to try and save himself from the screaming. Kies' face was a fuschia/violet color and sounded as though we were torturing him with a hot brand or something. I do have sympathy for him, however, as I stepped on about 2 this summer, through flip flops, and it hurt for about a week. So to have 32 in your feet couldn't have made for the most pleasant time.

Brensyn is such a funny little kid. This story is both sad, and HILARIOUS. We had a bit of a scare today as the kids were playing downstairs. I went down to check on them and smelled some gas, then heard some gas leaking. I hollered at all 6 kids to get upstairs fast and get out of the house. So we walked over to Cams... about half way down the block I realized Brens didn't have any shoes, so I ran back and grabbed him some. I put him in Wranglers this morning and that doubled with his little bow-legged walk was about the cutest thing I've ever seen. 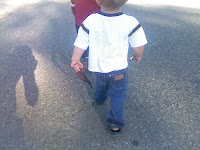 On the way back from Cam's, he was just walking along and minding his own business and this black and white Aussie dog come running out and barking and poor Brensyn started running away and screaming. He had the most terrified look on his face- and what did I do? I laughed so hard I could barely stop. I know I'm a horrible mother, but I couldn't help it. I knew as soon as I saw the dog coming it was going to scare him, but I didn't have time to go and get him. I laughed for a good two or three minutes straight. Poor little man! He got over it quickly though.

So as I said before, I'm coaching the middle school dance team and I become more stressed as the days go by. I not only have to coach them, I have to make up the dances, pick the music for them to dance to, choose the uniforms, schedule when they dance, fund-raise for them and a load of other things I never really thought about when I thought this would be so much fun. I know it will be fun- I know it. But I am still scared out of my mind. Especially after Ryan(Boettcher, my bro-in-law) tells me half of the girls are little you know what's! Yikes... hopefully I can whip them into shape. I am not going to take crap from a bunch of pre-teens!:) j/k... I probably will. So wish me luck, our first get-together is on Wednesday! Take Care!
Posted by jsmbbaker at 9:01 PM

Wow Shannon it looks like you have one busy week. I have only been paintballing once and I hated it! Erika and I went with a bunch of guys and all the guys attached us at once, so we had 50 paint bullets flying at us at once! So I thought it hurt and didn't like it. But I am glad you guys had fun! Poor Mckie! That is horrible! I cry when I step on just one of those! But 32! Was he jumping in them? How did he get 32! That is so sad! And Brensyn, poor thing, I bet he was really scared! I am terrified of dogs so I know how he feels! Good luck with Dance! It sounds fun, stressful and scary! I will pray for you!

Great post! It was so much fun to read! I've never been paintballing before. I'm too afraid of getting a welt like the one you've got! Poor McKie, I can't imagine having to get that many out of his little foot. Ansleigh is such a sweetheart. She looks adorable in that cheerleading costume. That's what I dressed Hailey up for Halloween as when she was that age. And I could just picture the entire episode of Brensyn scared to death of that dog while you laughed your face off. You're so funny! But not a bad mom!

Hey- Would you show Bab and Barb pictures of our house next time you are at their house and online? Thanks! :)

If someone starts stalking me from being listed on your blog... I will stick a goathead in YOUR bum. :) LOL