I had a very emotional week the past week. Monday was the viewing for Amee, and then Tuesday was the actual funeral. I can honestly say that it was the saddest funeral, for me anyway, that I have ever been to. Looking at my Aunt Brenda while she mourned the loss of her daughter, something you never think you will have to do, was hard enough, but looking at her daughters while they greeted people and tried to hold it together, was almost more than my heart could take. I know that she is not in pain anymore, as she was almost every moment of her life lately, and that she is more happy there than she could ever be here, but I don't know that everyone else there felt that way... and that was what made me sad most of all. I don't want to go into detail, as there are some things that would take too long to share, and things that are too personal to share, but it was an experience that I do not want to repeat any time soon... and I'm afraid that will not happen, as her husband, John, has a disease that could take him at any time. I am just so thankful for my beliefs and for all of the comfort that I was able to feel as I thought about what a great life Amee led, and what a great example of service and love that she showed. She was such a talent, and anything she put her mind to was great! I am so thankful to have known her and had a small part in her life. 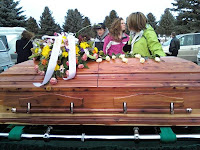 If you click on the picture, on the right side of the casket, you will notice a carving that my Dad did for John. It says Amee, and then has the Barrus brand below it.
Wednesday, I had dance, and was a little disappointed in the girls. After going over and over the dance, I asked them how many times they practiced over the 2 week break they had. There were two girls who didn't practice AT ALL, and most didn't practice much more than that. I was drained emotionally and may have come off a bit mean, but I was so upset that I put forth so much effort to get such a small effort back, if any at all.
When I got home, and we packed up and got ready and left for Colorado. We drove to Casper, and stayed with Kim and Danen Lynn so we could break the trip up a bit- so thanks Kim and Danen! Kim had set up space for all of us(Jaran, Kies, Brens, Ans, Dad and myself) in her living room, and was still up when we got there around 1 AM. We woke up around 7... then 7:30 and about every few minutes after that, and decided to finally get on the road around 8:45. When we got to Aunt Deana's, I started helping her with flowers for Jenna's wedding on Saturday. It was actually pretty nice, and I won't say fun, because we both had to work through some back issues while doing it, but we enjoyed ourselves as much as we could have! 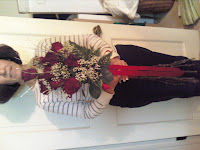 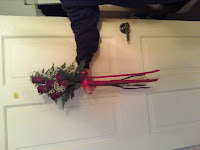 Here are the bridesmaids bouquets
So we got to bed late, after eating a delicious meal of homemade chicken noodle soup, and finishing all but the 3 grandpa's boutineers and the corsages. Jenna had 7 bridesmaids and Nate(her new hubby!) had 7 groomsmen... so we had quite a bit of stuff to do. We got up the next day, ate some scrumptious bacon and eggs, and went back to making boutineers and corsages. When we were finished, Jaran(who had been watching the kids all the last night and that morning, bless him!) went with my Dad and Jason and they hauled some logs around to later be cut for firewood. When he got home, we left for Loveland to lend a hand at decorating the church for the reception, and to visit. We didn't have a lot of time to do so, but we did visit a bit before they had their rehearsal dinner. We went over to Traci's and ended up staying the night and visiting with her, Jim and their girls. When we woke up, we had to go straight to Aunt Deana's, after getting some delicious cinnamon crunch bagels from Panera bread(I used to get one every morning before going to work when I lived there!), so I could take Dad over to the temple(my recommend expired and with the funeral and things, I didn't have time to renew it:(). I had a nice chat with Sheridan as we waited for the ceremony to get over, and the lovely couple to show us how happy and in love they are! Turns out that they had forgotten all the flowers in Loveland(an hour away) and Aunt Janna had also forgotten Jenna's slip for her dress... so things weren't going well. I decided that it was time to save the day, and tried to do so by going to walmart, getting some flowers and throwing together a sloppy bouquet for her pics... I don't know how much she cared about having flowers, but I hope that it made her feel a little better.
Dad and I headed back for Jaran and the kids and then made our way(after stopping at a walmart to get my mangled glasses repaired that Ansleigh thought I must not need to fit on my face, but on my face and the person next to me) to the place where my Grandma Pearl is living. She has Alzheimers, and I didn't know what kind of a visit it would be, but when she saw us coming, she new we were coming to visit her. Whether it was Dad or I, she recognized us, and it was a great visit! 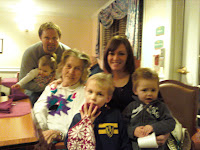 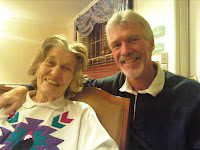 There was a lady sitting by her that kept saying "peek-a-boo, I see you" to the kids, in a very scary voice. I can't believe they didn't freak out, but she was a very nice lady. We sang a couple songs with Grandma, and stayed for about 45 minutes, before having to take off. She kept asking why she couldn't come with us, and it was very hard and sad to not be able to take her along, but in the end, we talked her into staying cause we didn't have room with the Kids and their seats.
When we got to the church, we had to change into our dress clothes, and then went in to greet the couple. They looked great, and I am so mad for not taking a couple pics, but I only had my phone to take them anyway, so it wouldn't have been a very good pic.
Jaran took the kids to Traci's for the night while Traci, Jamie(her youngest daughter) and I stayed to help clean up. My feet were killing me cause I was wearing the new boots I got(for $7) and they had a higher heel than I thought they did... but I got to gossip and get caught up with my cousins, so it was worth it. We had a nice visit with everyone, and I wish we could have stayed longer. I didn't get to meet up with any of my buddies, but I am determined to in March when we go for Shasta's wedding. I can't wait! Sorry for such a long one, I hope it doesn't annoy anyone! Take Care!
Posted by jsmbbaker at 7:23 PM

It sounds like you did have a CRAZY week! How long is the drive from WY to CO? That is nice you were able to see your grandma! She looks so cute in the pictures! Wow I can't believe the forgot the flowers! So someone was able to drive home and get them for the reception? It sounds like you guys have a lot of weddings to attend! Two in march with Jeremy's wedding anyway!

Sorry your week was so draining. I'm glad you were able to stay with us. I'm sorry it couldn't have been for longer. And I didn't even get to show you my house. :( Oh well!